So many people from different parts of the world claim that they have seen an inhuman monster or animal. The infinity explorers team investigated and scavenged the information from around the world and therefore we bring to you the list of top 5 mysterious creatures from around the world.(Mysterious)

Jersey devil is a legendary creature found in new jersey folklores. it is said that it is a flying creature with large wings and a goat-like head. The legend of this creature originates from a tale about “Mother Leeds” A wicked witch who awaken the devil while giving birth to her 13th child. People claim that the child soon after the birth transformed into the flying monster and flew away to the barren forest ever since people claim to have seen him around new jersey. Many animals are found killed and very unusual footprints are also seen.(Mysterious) 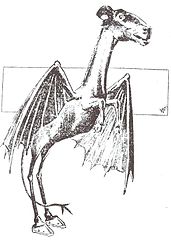 Here are some of the photographs that are claimed to be real by the people.

Yeti is a large sized inhuman creature. it is larger than a human in height and has an ape-like body with a lot of hairs on it. The Yeti is a legendary creature from the folklores of the Nepal. it is mostly said to be seen in the Himalayan region  of  Nepal, Bhutan, and Tibet. Yeti is also known as the “Abominable Snowman”.(Mysterious)

Here are some claimed to be real photographs of the Yeti

In lore, the Loch Ness Monster, or Nessie, is an aquatic being that apparently inhabits Loch Ness in the Scottish Highlands. it’s almost like other supposed lake monsters in Scotland and elsewhere and is usually described as being giant in size, with a long neck and one or a lot of humps projecting from the water. widespread interest and belief in the creature has varied since.The existence of is barely proved by some photographs and sonar readings.(Mysterious)

Here are some of the actual photographs of the loch ness monster Nessie.

Bigfoot is also known as Sasquatch. it’s the name given to a mythological ape, or hominid-like creature that’s said to inhabit forests, mainly within the Pacific Northwest. In American lore, Sasquatch is typically represented as an outsized, hairy, two-footed humanoid. Sighting of the beast usually comes from parts of the north America. it is described as a giant-size ape with a very large foot. Many people claim to have seen the big foot and some also claim to have been attacked by the sasquach.(Mysterious)

Here are some photographs of the big foot:

It is claimed that the Flatwoods Monster is a sort of extraterrestrial, as this creature was spotted within the locality of an outsized UFO that either hovered above or rested on the bottom in the city of Flatwoods, in Braxton County, West Virginia, on September twelve, 1952. consistent with the reports, this creature was vast, a minimum of ten feet tall. its face gave off a red glow, and its body was green in color. Its head was formed sort of a heart or Ace of Spades, and out of this unusually formed head bulged non-human eyes. The body is said as being formed like a man’s, and dressed in some style of dark covering resembling a skirt. Reports delineated the creature diversely as having either no visible arms, or having short, short arms ending in long claw-like fingers.(Mysterious)

Ansh Srivastava is the founder and paranormal researcher of Infinity Explorers. What began as a grad school hobby is now a paranormal blog, with millions of readers coming to his site for interesting weeknight Mysteries and astonishing paranormal encounters