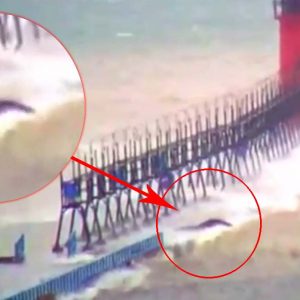 Much has been written about the mythical creature that inhabits Loch Ness in Scotland, but there are many others in other lakes in the world. There are less famous legends of cryptozoological creatures in Lake Michigan, one of the five Great Lakes of North America. The stories of monsters in this lake go back thousands of years. The Native Americans had their own tales of aquatic beasts with supernatural powers. When the Europeans arrived, they wrote about the existence of monsters in the lake that could put them in danger.

But in the late nineteenth century, newspapers in Chicago caused panic among the population, claiming that a snake 15 meters long was discovered in Lake Michigan. Over the years, most reports of monsters in the lake have proven to be tricks. However, there are others that continue to be a mystery. Now that we are in the digital age, videos and images that could prove their existence continue to appear. Moreover, there are many who believe that it is definitely a possibility that such creatures exist, since it is a large lake (with an area of ​​58,000 km²) and certain unexplored areas. And maybe the definitive evidence we already have.

The strange anomaly in Lake Michigan

Tim Wenzel, a resident of Michigan, posted a video on his Facebook page , hoping someone could identify what he called the “Loch Ness” monster on Lake Michigan. As he explained to the local media, about two weeks ago Wenzel was looking at a strong storm on Lake Michigan through a webcam when a mysterious and quite large creature appeared from the water . As the strong winds caused huge waves, a dark anomaly emerges near the lighthouse of Charlevoix South Pier Light Station, an illuminated landmark for the boats of Lake Michigan.

It was then that the strange sighting caught the attention of Wenzel, who managed to record the moment on his computer. When he subsequently posted it on his Facebook page, he said that the images showed “the monster of” Loch Ness “ being dragged over the southern pier during the storm. It is true that as with many other videos of strange aquatic creatures, it is quite difficult to discern what exactly Wenzel discovered due in large part to the current weather conditions and the image quality of the webcam.

But this has not prevented that after posting the video on Facebook, Wenzel received all kinds of suggestions as to what the monster might be. Some thought it was a giant sturgeon , which can weigh up to 90 kilos and reach a length of 2 meters. While it is known that sturgeons are flexible, and the creature in the video seems to be much longer.

For his part, Dr. Pete VanVranken, of the Dickman Road Veterinary Clinic in Battle Creek, told the WKFR-FM radio station that it appeared to be a giant eel , especially after seeing it seemingly slip through the barrier and dive in afterwards. to get to the other side. He explained that there are many species of eels and lampreys, both native and invasive, that inhabit Lake Michigan. However, even the sea lamprey only reaches a little over 1 meter in length and the creature in the video seems larger.

Be that as it may, the lack of information has led to all kinds of speculation about possible creatures that could be that size and also reside in Lake Michigan, such as sturgeon, eel and even a bull shark. But the most skeptical say that perhaps the “creature” was actually garbage or the remains of a huge seaweed dragged during the storm.

So, what is the strange anomaly in the video? A mutant lamprey or a sturgeon? Garbage or the remains of a seaweed? Or maybe it’s a prehistoric creature?