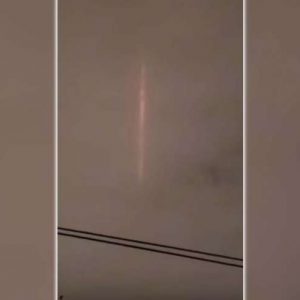 In recent years they have been reporting a really strange phenomenon all over the world, mysterious pillars of light that appear from nowhere in the sky. As we have seen in the large number of images that show these mysterious rays, usually appear vertically, radiating a strong flash usually red, blue or violet. As a result of numerous Internet users began to share the images of this strange phenomenon, many people began to ask questions: Is it a natural phenomenon? A failure in the camera? Is its origin extraterrestrial or is it perhaps a dimensional portal ?

But it all really started in 2009, when a man named Hector Siliezar visited the ancient Mayan city of Chichén Itzá with his wife and children. Like any other tourist, Siliezar took three photos of the Kukulkan temple with his iPhone, a pyramid that in the past was a sacred temple for the Mayan god Kukulkan. After reviewing the images later, in the first two there was nothing strange. However, in the third photo, you could clearly see a kind of pillar of light that went from pyramid to the sky. Subsequently, similar phenomena began to register in many parts of the world, such as Japan, the United States, Europe, etc.

Many thought that it was a warning about December 21, 2012 , the date that marked the end of the cycle of the Mayan calendar and the end of time. But one such, these pillars of light continued to appear in later years to the present. Like a recent video showing a huge red beam over a residential area in Edmonton, Canada.

The mysterious pillar of light

The popular YouTube channel ‘Secureteam10’ has recently uploaded a video that shows a mysterious pillar of light falling from the sky . Tyler Glockner, head of the YouTube channel, explained that the strange sighting was recorded in a residential area in Edmonton, Canada, and said that something very sinister is happening in the skies.

For Glockner, this pillar of light is enigmatic and mysterious, but he added that its origin was in heaven. In addition, as can be seen in the images, the light beam remains static at all times, so it was not difficult to see it from the ground. And soon after its publication, the video quickly went viral, causing a controversy in social networks about its true origin. Conspiracy theorists assured that these pillars of light in the sky are of extraterrestrial origin . According to this theory, civilizations from other worlds have been on our planet for centuries, following our evolution and intervening at important moments in our history.

However, there are also those who believe that these columns of light are actually energy weapons aimed at the sky or the atmosphere . As we already published in Esoteric and Paranormal World, directed energy weapons (DEW, for its acronym in English) is a real technology, although supposedly would be in the testing phase. A report prepared for the United States Congress described these weapons as  “that produce concentrated electromagnetic energy and atomic or subatomic particles . “

But there would be a series of logistical problems that would prevent to build a laser system to be operative in wars. Although apparently they would already be using secret government organizations or terrorists to cause fires, like those in California, or to devastate an entire city.

However, skeptics have another different opinion. The lights would actually be a fairly common atmospheric phenomenon called pillars of light. Although they look a lot like the aurora, they are not related to the Northern Lights, which are caused by electrically charged particles from the atoms that excite space in the Earth’s upper atmosphere, which causes them to release a spectacular light. Instead, these pillars occur in freezing temperatures when hexagonal ice crystals form lower in the atmosphere than they normally would.

When this happens, the crystals essentially form a collective giant mirror, which can reflect a source of light, like the lights of the city and the automobile. The pillars of light are an optical phenomenon that belongs to the halo family, since it is due to the interaction of light with ice crystals. It would simply show that nature tends to be more spectacular than science fiction itself. It is clear that this is the skeptical explanation, but perhaps its origin is not as logical as it seems.

What do you think of the pillar of light on Canada? Is it a natural phenomenon, directed energy weapons or is it of extraterrestrial origin?

1 thought on “A Mysterious Pillar of light appears over Canada”