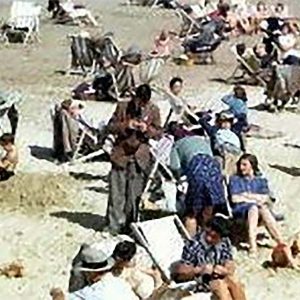 Imagine for a moment that time travel really exists, think of the endless possibilities. You could go back in time to correct any mistakes made and you could go to the future and create the life you once dreamed of. Well, maybe, this possibility is much more than science fiction. From the iconic image of a person apparently talking on the mobile phone in a Charlie Chaplin movie to the ‘hipster’ of the opening of a bridge in British Columbia, Canada, in the 1940s, are some of the evidence that travelers of time they exist, but there are many more.(time traveler)

In 2008, archaeologists discovered an intact tomb for 400 years. They saw a small gold metal object with the word ‘Swiss’ and with the time ’10: 06′ engraved. It turned out to be a strangely modern clock in a very old grave.

Other evidence of time travelers

Stuart Humphryes, an English multimedia artist known for his work on the television series Doctor Who, posted on his Twitter account a historic photograph taken on a British beach in the 1940s, with the following description:

“British war workers escape to the sea coast: This Cornish beach was photographed in September 1943. It would be great if any of you could identify what beach it is!”

In the image you can see some bathers, some sitting on sun loungers and others stretched out in the sand sunbathing, spending a pleasant day at the beach. But among the whole crowd, you can see a man looking at something he holds in his hands. However, nobody helped Humphryes with his doubt, since a user discovered that what the man in the brown suit (in the center of the image) holds in his hand is really a mobile phone.

“Is it me or is this guy checking his phone in the 1950s?” The user replied “South London History (@SouthHistory)” to the image published by Humphryes.

And that was when all madness broke out on Twitter. There were many Internet users who said it was new evidence that time travelers exist and remembered how Apple CEO Tim Cook, during a visit to the National Museum in Amsterdam in 2016, saw a man holding what looked like to be an iPhone in a 1670 painting entitled “A man delivering a letter to a woman in a hall,” by Pieter de Hooch.(time traveler)

But the most skeptical did not share the theory of time travelers, as expected. Some explained that perhaps he was a man reading a book, while others pointed out that it was a joke of Humphryes himself since the multimedia artist is best known for coloring the BBC science fiction series “Doctor Who,” which deals with travels in the time.

All a coincidence. However, Humphryes himself was responsible for discarding this last theory, because he joined the skeptical current by offering his own theory about the mysterious man in a brown suit. For the English multimedia artist, the individual in question was preparing a cigarette.

“No, it’s just a smoker preparing a cigarette,” Humphryes wrote.

The theory offered by Humphryes himself would initially explain the image, if not for another detail: the man is the only one who wears a suit on the entire beach, something strange for that time, and detail that attracts attention in the image. It is in these cases that one must rely on intuition to find an explanation.

What does the mysterious man hold in his hands? Is it a mobile phone? A cigarette? Or do you have another explanation?(time traveler)