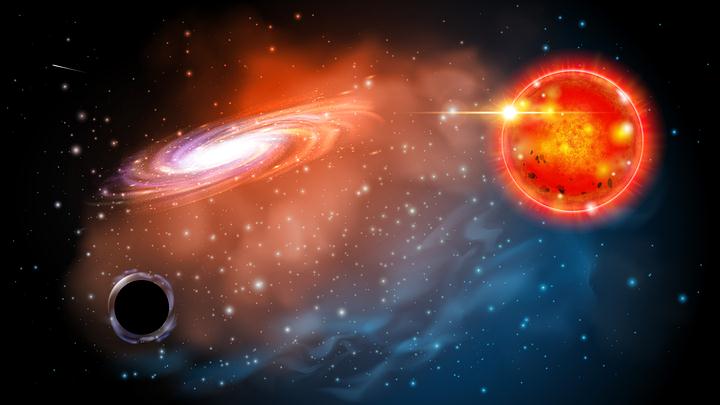 An international team of researchers has just announced that a whole new category of black holes ie. mini black holes could have gone unnoticed so far for astronomers.

The study, led by Todd Thompson, a professor of astronomy at Ohio State University, offers a totally new way of looking for black holes and shows that it is very possible that out there there is an even unknown class of them mini black holes, smaller than the minors known so far.

In Thompson’s own words: “We found a clue that indicates that there is another population out there that is still to be investigated in our search for black holes.”

According to the astronomer, what we know so far would be how to trust the census of a city in which only the inhabitants of more than 1.70 meters had been taken into account, and in which no one, in addition, even knew that it is possible that there are shorter people. Of course, the data from that census would not represent the real population of the city, and for Thompson, that is exactly what is happening with the search for black holes.

For a long time, astronomers have looked for black holes with a force of gravity so strong that nothing, neither matter nor radiation, can escape from its claws once crossed the event horizon, the imaginary line from which the return is impossible. Normally, black holes form when stars with a high mass die, contract and explode. If, on the contrary, the original star is smaller and does not have the critical mass, at death it can form another object of great interest, a neutron star, a “piece” that is also highly coveted by researchers.

Both types of objects, black holes, and neutron stars can contain valuable information about the elements on Earth (the heaviest, in fact, are formed during stellar explosions), and also about how stars live and die. But in order to access all that information, you first have to find out where the black holes are. And to discover them, the minimum is to know exactly what is being sought.

The stars that live as a couple

According to Thompson, that’s precisely where we fail. We have some clues, of course, that prevent our search from being completely blind, and the most fruitful are provided by binary systems, that is, pairs of stars very close to each other that, due to their gravity, orbit each other. the other. It happens that when one of those stars dies, his companion can still shine and orbit around the space where the dead star was, which could have become a black hole or a neutron star.

But in summer 2017 everything changed. The LIGO gravitational wave detector, in effect (which does not need to be guided by the brightness of one of the members of a binary system to find out if its partner is a black hole), saw how two black holes melted into one in a galaxy neighbor, 1.8 million light-years away from Earth. One of those black holes had 31 solar masses, and the other 25. “Immediately,” Thompson explains, “everyone thought” Wow, “because that was spectacular. And not only because it showed that LIGO worked, but because the masses were huge. We had never seen black holes of that size before.

Black holes out of range

Both Thompson and other researchers had long suspected that black holes might exist outside the known size range, and the discovery of LIGO showed, in effect, that they could be larger. But what about the range of sizes between larger neutron stars and smaller black holes? Thompson and his colleagues decided, precisely, to work to solve that mystery.

To achieve this, the team of astronomers began analyzing the data of APOGEE (Experiment of Galactic Evolution of the Apache Point Observatory), which has already collected light spectra of around 100,000 stars in the Milky Way. These spectra, in effect, can show if a star is orbiting around another object: if the luminous spectrum changes first to more blue wavelengths, and then changes back to more red wavelengths, it means that it was approaching first blue) to move away later (red). If the pattern repeats, (blue, red, blue, red …) it is very likely that the star is orbiting a partner in a binary system. But if a star shows that behavior and the companion star is invisible,

Thompson reduced the 100,000 stars studied by APOGEE to the 200 most interesting. And then he compared the data of those potential binary systems with the images of those same stars in another instrument, ASAS-SN, which tracks the sky in search of supernovae.

A new hole next to a red giant

The comparison revealed the presence of a giant red star that seemed to be orbiting something. But that “something,” according to calculations, was much smaller than the black holes known in our galaxy, although much larger than any of the neutron stars we know about. In the end, and after carrying out additional calculations with the Echelle Reflector Tillinghast spectrograph and the Gaia satellite, the researchers realized that they had found a black hole of low mass ie. mini black holes, about 3.3 times the mass of the Sun.

“What we’ve done here,” Thompson concludes, “is to find a new way to look for black holes, but we’ve also identified one of a new class of low-mass black holes that astronomers didn’t know before.”

The findings were published yesterday (Oct. 31) in the journal Science.