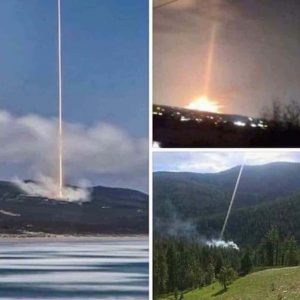 This month, California has been severely affected by three devastating fires: Camp Fire in northern California, and in the south the so-called Woolsey and Hill. US authorities have confirmed that at least 74 people have died in the catastrophic forest fire north of California, active for a week, while another 1,000 are still missing.

What is already considered the most deadly and destructive wildfire in the history of the state could now become one of the worst catastrophes in the United States. According to the latest data offered by the California Department of Forestry and Fire Protection (Cal Fire), the fire called “Camp Fire”It has destroyed more than 12,000 buildings, mostly in the town of Paradise, which was completely engulfed by flames, along with 57,500 hectares of vegetation. But it seems that the causes that have led to all these ferocious forest fires are still unknown, so the Internet has been filled with all sorts of conspiracy theories and graphic evidence that would show that behind this unprecedented catastrophe something is hidden really sinister.

According to the conspiracy theorists, one of the main causes of fires in California could be the participation of secret government organizations, terrorists and even extraterrestrials.  They claim that advanced laser weapons are being used to create the fires. Experts in the field argue that these lasers are actually directed energy weapons that could cause a fire by targeting a specific target.

Moreover, in the last hours have been published on social networks images and videos of lasers that fall directly from the sky. For believers in extraterrestrial theory, these events are clear signals before an alien invasion. Apparently, they would be small attacks before the big invasion began. But leaving aside the real cause, the theory of advanced laser weapons are not far-fetched as it seems. According to the technology portal Gizmodo, directed energy weapons (DEW, for its acronym in English) is a real technology, but supposedly is still in the testing phase.

A report prepared for the United States Congress describes this type of weapons as “that produce concentrated electromagnetic energy and atomic or subatomic particles. ” However, there would be a series of logistical problems that would prevent the construction of a laser system to be operative in a battlefield. But for the conspirators, the DEW would already be operational and can be demonstrated by the images showing completely destroyed buildings while others are intact.

“You will notice that stores and restaurants are destroyed, while other buildings are in perfect condition,” explains Matt Procella, a well-known American conspiracy theorist. “Other buildings are fine, the trees are intact, but the specific structures are simply devastated. You have to ask yourself, what about that … is this the result of direct energy weapons? Weapons from a distance that inflict damage to an objective by emitting highly focused energy? The answer is very likely yes. “

And what would be the real goal of all these catastrophic fires? If the US government really is behind this, then it would be a monopoly agreement on land worth billions of dollars . The fires force to abandon the residents of the area to satisfy the needs of the elites, who direct the world politics in the shade. Another possibility is that forest fires were created in such a way to make way for a high-speed rail system.

Meanwhile, the most doomsayers claim that these events are the result of an imminent apocalypse. According to the apocalyptic believers, the fires in California, along with the latest signs in Jerusalem, show that the biblical prophecies that could ultimately result in the Second Coming of Christ to Earth are being fulfilled.

Without a doubt, the historic forest fires in California are hard to talk about. And although the California Department of Forestry and Fire Protection revealed that experts believe that the Camp Fire fire could have started with downed power lines at the Pacific Gas and Electric Company’s power plant, many maintain that behind it is hidden a much more sinister truth.

Have the fires in California been caused by directed energy weapons? Or could its origin be something more mundane?