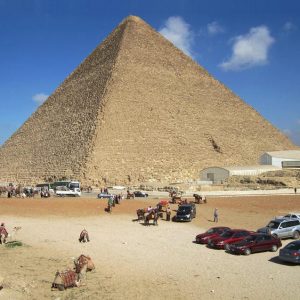 The Great Pyramid of Giza is one of the most amazing structures ever built on Earth. In addition to being a massive and imposing ancient monument, built with mysterious techniques, the structure located on the Giza plateau has refused to reveal all its secrets despite hundreds of years of archaeological studies.

Mainstream scholars contend that the structure was commissioned by Pharaoh Khufu and that it was built as a tomb for a period of 10 to 20 years that ended around 2560 BC. However, despite massive efforts to demonstrate that the Great Pyramid was built as a tomb, not a single piece of archaeological evidence has been discovered over the years that indicates that the Pyramid is a massive tomb. Now, if the pyramid was not meant to serve as a tomb, what was its true purpose then? Here are 10 reasons why the Great Pyramid of Giza may have been a massive energy machine. To understand how something like this is even possible, we must take a look at the materials with which the pyramid was built, since the building materials contain unique electrical properties:

(1) Scientists have discovered that the granite stones that were used in the corridors of the Pyramids are slightly radioactive, a feature that allows the stone to electrify the air. For some reason, the builders of the pyramid used

3) The Pyramid is in a powerful source of underground energy, like many other ancient structures throughout the world. (4) The geology present in the Giza plateau naturally concentrates large amounts of electromagnetic forces on our planet. Below the surface, the natural electrical forces that travel are known as telluric currents or Earth current. Telluric currents are an electric current that moves underground or through the sea. Telluric currents are the result of natural causes and of human activity, and discrete currents interact in a complex pattern.

There is evidence that ancient Egyptians used electricity thousands of years ago, even though mainstream academics refused to accept this idea. (5) If we take a look inside the corridors and chambers of the Great Pyramid, there is no evidence that the ancient builders of the Pyramid used torches or fire to illuminate the interior of the Pyramid as if it were not a single evidence of soot. o Smoke has been found in the corridors.

There are reliefs in different Egyptian temples that show what many authors interpret as massive bulbs. In addition, if we take a look at the calls (6) Baghdad Batteries, we understand that thousands of years ago, these devices actually produced electricity.

As mentioned earlier, (7) there is not a single piece of evidence to suggest that the Pyramid was a tomb, and this idea is supported by the interior design of the Pyramid. The Great Pyramid of Giza differs greatly from all the other tombs that have been explored in Ancient Egypt. The inside of the pyramid is cold in terms of design. (8) There are no decorations inside, different construction materials were used and a single mummy has never been found inside.

Also Read : The Mystery behind the ‘Pyramid of the End of the World’