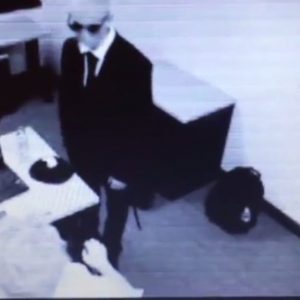 The strange images of an accountant who was put in a trance by a mysterious man in black led the British to speculate about the existence of the infamous ‘Men in Black’.

It is said that the ‘men in black’ keep silent witnesses of strange events. The CCTV recording was posted on the YouTube channel ApexTV , and was allegedly sent by a man who works as a security guard for an accounting firm in Liverpool.

On January 3 at 3:33 p.m., the security cameras detected something strange that has since led to the disappearance of one of the employees of the company known as Liam.

Liam is seen sitting on his computer inside the office when he hears a knock on the door. Without thinking about it, he opens the door by letting in a strange bald person dressed in a black suit and black sunglasses. They shake hands and Liam sits at his desk while the man in black stands in front of him.

Liam’s colleague in the video says he does not know Liam so well, but on social media last week he saw that Liam had been on vacation and was posting photos of “a forest and a strange place.”

His colleague continued: “There was a really strange object that I kept taking many pictures of and posting on social networks.” In the video, the man in black seems to be arguing with Liam about something.

Liam’s colleague, who narrated the video, said he believes this has to do with the photos that Liam took the week before. Halfway through the confrontation, Liam raises his arms to defend himself while the man in black approaches the desk.

In defense, Liam grabs a pair of scissors next to his computer and holds them up before the strange looking man. Instead of attacking Liam, the man pulls out a bright object that seems to put Liam in a trance, which leads him to release the scissors and remain completely motionless.

The man then makes a triangular symbol with both hands to Liam on the table. He slowly gets up from his seat and follows the orders the man gives him, taking an unknown object out of his backpack and handing it to the man in black.

About half an hour later, the man reappears, scanning the room for something else, before settling for Liam’s backpack.

Liam left without his shoes and apparently has not been seen since that day either in person or on social networks. The narrator of the video said: “I do not believe in UFOs or extraterrestrials, but why else would they confront it in this way?”

He continued later: “I’m going to try to find out what happened. This needs to be seen, this needs to come out. Something is obviously very, very bad here. “

So far, many people have come to the conclusion that this is a sighting of the infamous ‘men in black’ who are said to be the ones who keep silent witnesses of strange events.

What’s your opinion about it? Is it real or just one more fake of this famous YouTube channel? Watch the original video below and leave us your comment below.