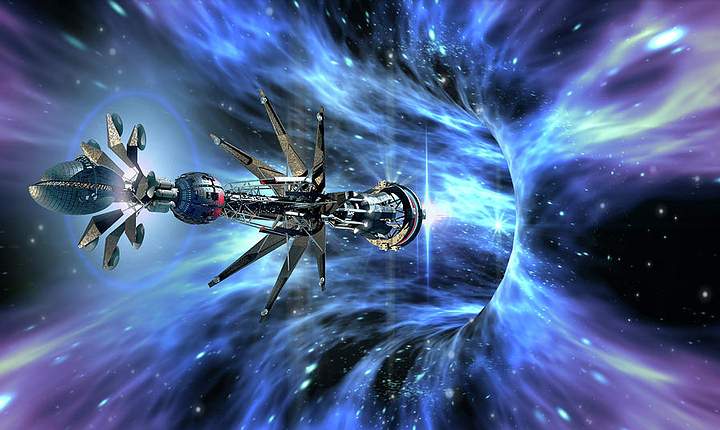 All you need is a pair of black holes and some cosmic strings. Nothing special to build a wormhole

It has often been suggested that the best way to cross vast interstellar distances and visit new worlds is a wormhole, and thus save hundreds or thousands of years of travel. A shortcut of this nature would allow us to go from one corner to another of the universe without greater time consumption.

However, there is a small technical difficulty: wormholes, capable of bending space-time and forming a tunnel, are catastrophically unstable. So much so that if you send a simple photon through it, the hole will collapse faster than the speed of light.

Now a scientific article published in arXiv claims to have found a way to give stability to these structures, one that allows sending messages – and potentially things – through the tunnel before it collapses. All that is required are two black holes and a few infinitely long cosmic strings. Very easy.

The problem of what does not exist

In principle, building a wormhole is quite straightforward. According to Einstein’s theory of general relativity, mass and energy involve the space-time factory. And some special configuration of matter and energy allows the formation of a tunnel, a shortcut between two distant portions of the universe.

Unfortunately, even on paper, these wormholes are very unstable. Although a dose of negative mass – mass of a sign contrary to that of the mass of ordinary matter – could counteract the destabilizing effects of matter passing through the tunnel.

The bad: negative mass is just a hypothetical concept of theoretical physics.

A wormhole has at least two ends connected to a single throat, through which matter could travel.

The bad: white holes, which we know so far, do not exist. They are only theory.

Since white holes do not exist, we need a new plan and some math to reveal a possible solution: a loaded black hole. These hungry monsters can have an electric charge and their interior is a strange place, with their point of singularity stretched and distorted, thus allowing a bridge to another black hole with opposite charge.

However, these loaded holes have two problems. One is that they are still unstable if something or someone tries to use them; and two is that both holes will attract each other through electric and gravitational forces. If both merged into one, then we would only have a huge black hole loaded and unusable to build a wormhole.

Tying them with cosmic strings

So, for everything to work we need the two loaded holes to stay away from each other, and make sure that the wormhole is kept open to be traversed from end to end. The potential solution: cosmic strings.

Cosmic strings are defects of spacetime, similar to the cracks that form when ice freezes. These cosmic remains were born in the early universe, after the first fractions of a second after the Big Bang. They are truly exotic objects, no wider than a proton but only one inch of its length heavier than Mount Everest.

According to the new theories, the Universe may have been created from cosmic strings: invisible threads that are thinner than an atom, terribly energetic – since the energy of the Big Bang is inside it – and disconcertingly eccentric in its behavior. The threads would be scattered, like a skein of unwound thread across the cosmos, and would move at a speed close to the light.

You would never want to meet one of these strings, since it would cut you in half as if it were a lightsaber. And although their existence is hypothetical, there is no reason to think they are not there.(build a wormhole)

They also have a property that could serve when we talk about wormholes: a huge strain. In other words, they don’t like to be touched. If you touch a wormhole with a cosmic string, and allow the string to pass through the outer edges of the black holes, stretching to infinity, then the resulting tension would prevent electrically charged holes from attracting them, keeping them in their respective places as input and output. In short, the distant ends of the cosmic strings act as two teams playing tug of war.

A cosmic string solves one of the problems (keeping the ends open), but does not prevent the wormhole from collapsing when used as a shortcut between two parts of the universe. This is where we would need another cosmic string touching the wormhole but also forming a circle through the space between the black holes.

When a cosmic string is closed in a circle, it is drastically contoured. Their vibrations stir the space-time factory around them, and when they are tuned into the correct vibrations they can cause the energy of the nearby space to become negative, effectively acting as a negative mass inside the wormhole and stabilizing it.

To date, no evidence has been found that known space-time contains structures of this type, so it is currently only a theoretical possibility in science.

And although it is not a perfect solution —or simple—, the fact is that theoretical physicists published this week a step-by-step guide to building a wormhole. In it they warn that although it is possible to stabilize the tunnel, it is not permanent. Eventually the vibrations of the cosmic strings – the same ones that keep the doors open – throw energy, and therefore mass of the rope, making it smaller and smaller. This means that over time the strings vibrate until they are lost, causing the wormhole to collapse later.

“But the wormhole – they add – could remain stable and open for long enough to send messages or even an object travel through it safely.”

Of course, we must first find some cosmic strings …