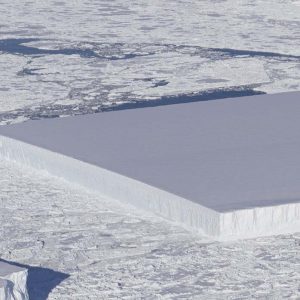 A few days ago we published the photo of a rectangular iceberg that had come to us as news from NASA, along with a brief explanation of the phenomenon. However, the image soon went viral on the Internet and was subjected to all kinds of speculation about its origin.

Next, we expose not only that photo but another of a similar iceberg taken in the same sequence of images. The image was taken on October 16th from an airplane of the agency as part of a mission that monitors the polar ice and was published days ago with the following caption: “A tabular iceberg can be seen on the right, floating among the ice marine right next to the Larsen C ice shelf. The sharp angles and a flat surface of the iceberg indicate that it recently detached from the ice shelf. “

Although the image of a perfectly rectangular iceberg has attracted attention around the world, experts explain that every so often there are these pieces of ice floating in the sea. In the scientific journal Live Science, NASA ice expert Kelly Brunt explained that there are mainly two types of icebergs: those with irregular shapes that only appear a small part of the surface (the most common) and those that appear to be visible prisms or floating triangles.

The latter, the tabular icebergs, are broad, flat and separate from large blocks of ice connected to the ground whose ends float in the water. “It’s like when the fingernails break when they’re too long,” Brunt stressed. The expert also indicated that the “tabular icebergs are broad and flat, long, like a slice of cake.” A matter of perspective … In fact, it is the framing of photography that makes the iceberg so extraordinary. Possibly in the piece of the photo that is not seen it could be seen that the floating ice is losing its perfect rectangular shape. And in fact, it is! There is a photograph that shows one of the hidden corners in the viral photo:

The corner is clearly not as perfect as those that gave rise to theories as varied as the iceberg was cut by lasers from space! Expert scientist Twila Moon told The Washington Post that when an iceberg falls off a floating ice shelf (which is not in contact with the bottom of the ocean that makes them friction), it can break as if it were “a crystal or a glass “, with almost perfect and straight edges.(rectangular iceberg)

“That’s when big tabular icebergs form,” detailed Moon. And there is another reason for those angles that seem to be achieved by a laser cut: the youth of this piece of ice detached. Having been captured by photography in a phase of recent detachment neither the waves nor the wind have made a dent in the structure. The author of the above photos is Jeremy Harbeck, an IceBridge Operation Scientist who sighted these incredible ice masses.(rectangular iceberg

«I thought it was very interesting; I often see icebergs with relatively angular edges, but I had never seen one that had two corners with angles as straight as this, “Harbeck said in reference to the viral photo. “I was actually more interested in capturing the A68 iceberg that we were going to fly over, but this rectangular iceberg seemed visually appealing and very photogenic, so I took a couple of photos.” With A68, Harbeck refers to a block of massive ice, as big as the state of Delaware, which broke off in July 2017 from the Larsen C platform, giving rise to the A68 iceberg.

The flight from where Harbeck took the photographs left Punta Arenas, Chile, as part of a 5-week campaign that will conclude on November 18. Another mass located in the Weddell Sea presents a geometric shape reminiscent of a piece of pizza, in fact, scientists have dubbed it “pizzaberg”. This block of ice came off in the same area, and in a similar period, as the rectangular one:(rectangular iceberg)