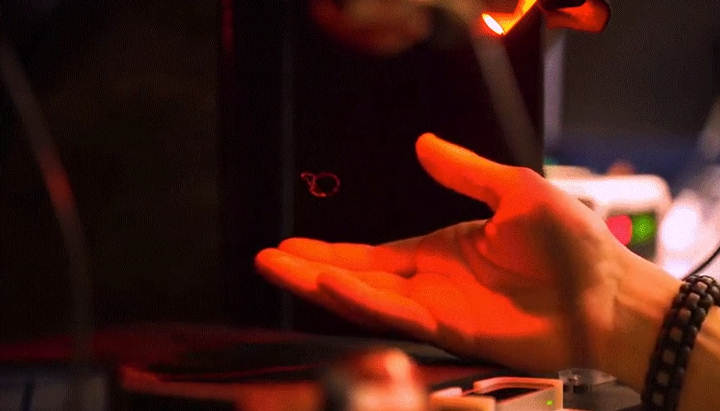 Moving holograms and speakers have been common in science fiction series and movies, such as that of Princess Leia in the Star Wars movie, one of the most remembered.

Now, British scientists have taken real holographic technology a step further, allowing them to be seen not only by the naked eye and from any angle, but also ears and senses without the need for any virtual reality system.

In an article published in the journal Nature , a team from the University of Sussex, in the south of England, states that current technology can create three-dimensional images, however, it does so slowly and fleetingly, and “above all, it lies on operational principles that cannot generate tactile or auditory content in the same way ».

To solve this lack, the team created a prototype called MATD (for  Multimodal Acoustic Trap Display ), which can “simultaneously generate visual, auditory and tactile content”.

It is based on what is known as “acoustophoretic,” sound waves that move and manipulate an object; in this case, particles to form an image in a small box that contains a system of tiny speakers.(Holograms)

“Our system catches a particle acoustically and illuminates it with RGB light (red, green and blue) to control its color as it quickly scans through open space and reveals the illusion of volumetric content,” the researchers detail.

And since the gears of everything are sound waves, this allows the hologram to be heard and even felt.

One of the scientists, Ryuji Hirayama, explained how this last feature works, so crucial to make an object look real: “Even if it is not audible to us, ultrasound is still a mechanical wave and carries energy through the air.

Our prototype directs and focuses this energy, which can then stimulate your ears to listen to audio, or stimulate your skin to feel the content of the hologram ».

“The tactile sensation is similar to gently pulling compressed air over your hand,” he added.

MATD technology thus becomes another of the many things that someone first showed in fiction, but that has finally been translated into reality. But beyond being able to send Holograms to Obi-Wan, the research team believes that its system could become an incredibly useful visualization tool for a wide variety of professions, including anyone working in biomedicine, design or architecture.