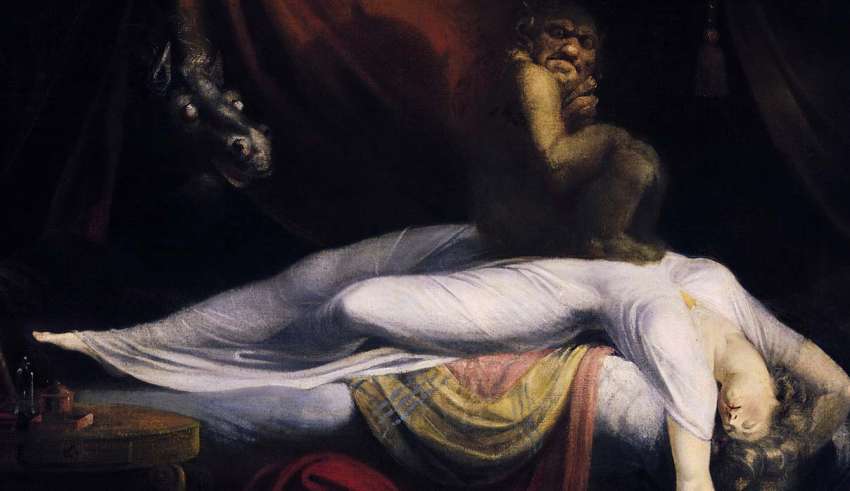 You wake up in the middle of the night and you find that you can not move or scream for help. You are barely able to breathe, even feel a great weight in the chest. You also perceive a presence by the bed, very negative, but most important of all is that you feel powerless to react.(Sleep paralysis)

Have you ever had a similar experience? The symptoms written above are a classic example of what is known as the “old hag” syndrome. Victims awaken to find themselves unable to move, despite being able to see, hear, feel and smell. Regardless of the medical explanation or the paranormal theory for this surprisingly common phenomenon affecting thousands of people, it can not be denied that this is a frightening experience for the sufferer.

Some of the victims of this horrible condition are able to convince themselves that the experience was nothing more than a dream or even a terrifying nightmare. Other people remain convinced that they have been attacked by a supernatural entity. The latter claim that their “aggressor” is actually an external phenomenon and not a state produced by their subconscious.

However, as always dream experts and psychologists dismiss this as a paranormal phenomenon, explaining that the thoughts, images and sensations released from a person’s subconscious are ultimately alien to the individual. But the reality is much more complex, since the dream state is a phenomenon that currently has  many unanswered questions . Throughout the world, and over time, the physiological aspects of sleep paralysis have been and remain the same irrespective of the victim’s race, religion or culture. They are the almost uncountable interpretations of these symptoms, which make sleep paralysis one of the most feared paranormal phenomena.

A brief explanation about sleep paralysis

Sleep paralysis is closely related to the natural paralysis that occurs in REM sleep (in English  “Rapid Eye Movement”  or  “Rapid Eye Movement” ) the dream state. The victim is fully aware and alert, however, the body remains paralyzed . In this state, the brain is able to manifest visions that are lived intensely, without the body being able to react. The understandable reaction to this scenario is fear and panic, being for the victim a terribly real experience.

All the natural senses of the individual remain fully functioning, that is, smell, taste, touch, hearing and sight, increasing the terror of the moment. During REM sleep the metabolism is slower,  the heart rate is reduced , as well as blood pressure and respiratory rate. Along with all this comes muscle paralysis, all of these being a safety mechanism to avoid injuries during the sleep state. With the heartbeat and reduced respiratory rate the victim will experience the sensation of pressure on the chest wall and difficulty breathing. In this natural state of fear and panic, the victim may feel a heavy feeling in their chest.

Many experts in the paranormal claim that some people who experience sleep paralysis are being subjected by negative entities. There have been many reports of strange experiences during the transition phase between sleep and wakefulness (called the hypnagogic state). It is well known that visits occur during sleep, since it is the most unprotected moment for our being and relatively easy for a spirit or entity to communicate with us.

According to personal experiences, there are spirits or entities that opt ​​for psychological or physical assault against the victim. Some people even claim to be sexually assaulted by an unknown force , commonly known as Incubus. An incubus is a male-shaped demon that sexually assaults women while they sleep. (A succubus, is the female demon).

As we already published in Esoteric and Paranormal World, the extraterrestrial abduction is another of the possible theories to the sleep paralysis, since many reports on abductions usually begin when the victim falls in the dream, waking up unable to move, feeling a Presence in the room, watching one or more beings standing next to the bed to wake up with the very strange feeling and with vague memories of what really happened.

Many of these people try to remember these experiences using hypnosis . During hypnosis the victim returns to the onset of paralysis or kidnapping. Most experience memories of having been  “removed”  from their bedroom and taken to an unknown location. Some remember gray beings with large eyes and thin bodies performing experiments. When the victim wakes up, he goes back to bed.

In many  Anglo-Saxon  societies sleep paralysis is known as the “Old Hag” syndrome ,  where the victim usually wakes up with a sense of terror, with difficulty breathing because of an invisible weight on the chest And without being able to move.

In Fiji it  is interpreted as being possessed by a demon. In many cases the  “demon”  may be the spirit of a deceased relative who has returned to finish something pending, or simply needs to communicate important news to family members.

In Nigeria it  is much more common among native Africans than in the white population and is often referred to in African communities as the  “Devil in the back” .

In Korean culture , it is associated with ghosts or spirits that are placed at the top or pressing the chest of the victim.

In Cambodia , he describes himself as a person who is sleeping and dreams that one or more ghostly apparitions are near. The victim often thinks she is awake but unable to move or make sounds.

In Vietnamese culture means  the victim is held by a ghost or a shadow.

In Iceland it  is believed that an elf or succubus (usually a woman) causes nightmares.

Other  European cultures  have variants of the same folklore, but with different names.

In Mexico it  is believed to be caused by the spirit of a dead person. This particular ghost, lies down on the body of the victim to sleep, without allowing the victim to move.

It is important to note that, if a person has the experience of sleep paralysis, the first thing is to find out all the details about medical history , sleep disorders, lifestyle, etc … One of the questions we have to ask ourselves Is whether sleep paralysis has begun before or after their experiences. You also have to know how many episodes of sleep paralysis have been experienced, when they started and if someone from family or friends has suffered the same phenomenon . In many cases sleep paralysis may have a medical explanation, but in many other cases it has no scientific explanation, the unknown being our worst nightmare.

4 thoughts on “Sleep paralysis, attacks from beyond?”