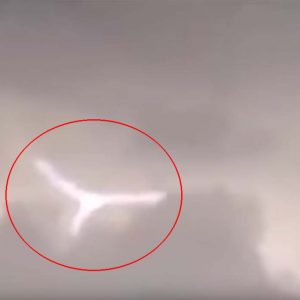 The angels are among us. They appear in paintings, prints, figures, t-shirts, posters and on television. Angels are beings that are present in various religions. For example, in Islam, angels are said to be made of light, while Christian angels were created by God. The first representations of the angels had no gender, although later Christian angels were tall, thin men with soft features often dressed in specially designed loose robes around their large white wings. It is said that angels are immortal or long-lived.Lets have a look at strange bright creature spotted in Brazil

But many people around the world have reported encounters with mysterious beings. They claimed to bring important messages or much-needed help, then disappear without a trace. Could these angelic beings be? Some of the most fascinating and inspiring stories of the inexplicable are those that people perceive as miraculous in nature. Their appearances related to answered prayers or were interpreted as the actions of the guardian angels. Whatever it is, these meetings offer peace of mind, strengthen faith and even save lives, since they almost always seem to happen when they need them most. Are they literally celestial beings, or simply the result of the interaction of our consciousness with a deeply mysterious universe? Maybe we will find the answer in a new video that seems to show strange bright creature spotted in Brazil.

The angel over Brazil

The enigmatic and enormous figure was recorded rising in a cloudy sky , changing direction, but retaining its strange shape. It is not clear if the object is a source of energy or a surprising optical phenomenon. What we know is that the event happened in Brazil. The video uploaded by the YouTube channel “Disclose Screen ‘The Grimreefar’” on August 12 and shows a bright T-shaped object in the cloudy sky, strangely similar to an angel with a long robe.

“It looks like a reflection of light, but again it looks like a source of energy,” says the witness who recorded the video. “It even has the harmonious appearance of an angel.”

The strange T-shaped object remains in motion for a period of time, moving from one cloud to another, changing angle and direction. People who commented on the images suggested that the mysterious figure also resembled a dragon.

The nature of the phenomenon remains unclear. But the most skeptical said that the iridescent aura around the cloud was rarely seen and was due to a combination of perfect weather and conditions. They explain that the rare phenomenon occurs when sunlight diffracts through a high density of ice crystals that bend the light, creating a surprising color. The cloud in which the figure was formed is known as “pileus” that is formed from the water vapor that condenses and freezes into uniform ice crystals as a result of the rapid updraft of the storm.

Very specific angles are needed to see the formation, so the position and height of the storm, the angle of the sun and the size of the ice crystals joined together to give the witnesses a rare and perfect view of iridescence.

But there are many who do not believe in the skeptical version and say that this is not the first time a divine sign appears in the heavens. In May of this year several inhabitants of San Salvador de Jujuy, in Argentina, saw a strange figure among the clouds. An image clearly showed the shape of the figure in the sky very similar to Jesus Christ with outstretched arms. He had well-defined edges, and his face was quite clear, you could even see a kind of cassock and a crown of thorns on his head.what do you think about strange bright creature spotted in Brazil ?

This leads us to the fact that angels are very popular for many reasons, even because they represent unconditional love and appeal to personal experience. Whether real or fictitious, angels have been with humans for millennia, and their presence will continue until the end of humanity. And the truth is that it doesn’t matter if it’s simple coincidences or real encounters if it serves as a comfort to millions of people.

What do you think about the video? Do you think it can be a real angel? Or is it a strange weather phenomenon?