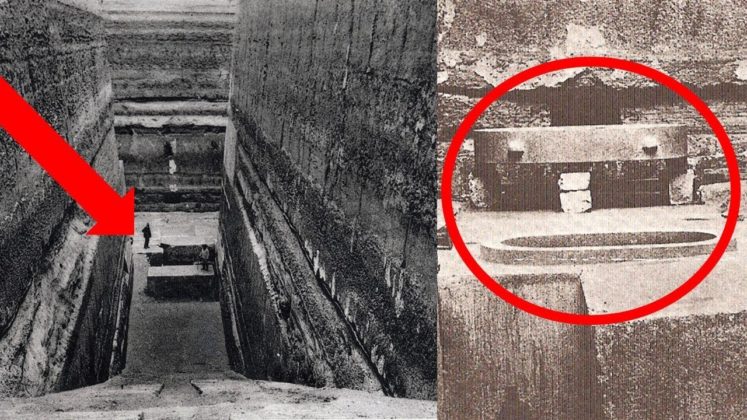 Most people don’t know that near the famous trio of pyramids in Giza, Egypt, there are two other pyramids of which only their foundations remain and one of them is Pyramid of Zawyet El Aryan

One of them is called the Unfinished North Pyramid of Zawyet El Aryan, almost 5 km southeast of Giza; the other, smaller, is called Layer Pyramid.

Archaeologists think that these are unfinished pyramids, but we believe that they were actually destroyed a long time ago.

We looked online for information on the unfinished North Pyramid of Zawyet El Aryan, and found that the information was often wrong and misleading.

The pyramid is not unfinished, the underground structure is not a burial chamber or a grave, and the granite bathtub they found is not a sarcophagus.

We always like to go to the original source, which, in this case, is the Italian archaeologist Alessandro Barsanti, who found the remains of the pyramid in 1900 and began digging in 1904.

His original report, in French, contains descriptions of the underground corridors, the chamber, and the curious oval bathtub. Your description of this stone tub and how it was sealed and protected is really remarkable.

Although Barsanti was impressed by the high quality of the stone work of the descending well and the open room at the bottom, no one else investigated this monument.

Since 1964, the pyramid was placed in a restricted military area, and further excavation is prohibited.

The entire base of the North Pyramid of Zawyet El Aryan is cut from the local limestone. Its base is 200 meters, which would make it almost as tall as the Great Pyramid of Giza. A large descending tree was cut from this rock that leads to an underground chamber.

Archaeologists still attribute this interior space to a funerary function, where the pharaoh was supposed to be buried, even though all the stone chests (which were not sarcophagi) found in the pyramids were empty, and all the pharaohs and aristocrats They were buried in the Valley of the Kings.

As some researchers have pointed out, the construction of the pyramids and their interior design shows that they were technological devices intended to harvest energy, from the earth and the cosmos, and probably use this energy for multiple purposes.

Some people say that the pyramid builders (in Atlantis) used liquids and gases inside the pyramids, which is interesting because of the granite tank at the base of the North Pyramid of Zawyet El Aryan .

Others say that the underground veins of water produced electricity and sound vibrations that were amplified by the construction of the pyramid.

At this time we do not know for sure how the pyramids worked because the Atlanteans used a very different technology, and the remains were ruined.

Yes, most of the pyramids were built over twelve thousand years ago during the Atlantean period. After its disappearance and the destruction of the coastal lands by huge tsunamis, much of what was in Egypt was left in ruins.

After several thousand years, the dynastic Egyptians settled there, adopting the pyramids and everything they found, in their own culture.

For example, we see that some of the dynastic temples, built with small stones, were built on large blocks of stone of several tons, which were the remaining base of the Atlantean buildings.

What has also been pointed out is that at one time, probably when the Atlantean civilization reached a catastrophic end, there was a malfunction in pyramid technology and explosions occurred.