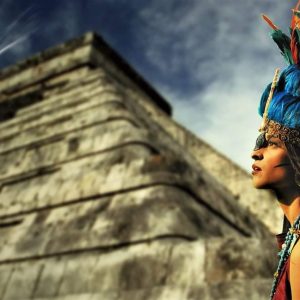 The complete skeleton of a 1,500-year-old Mayan queen has been discovered in a hidden pyramid in the Guatemalan jungle. Archaeologists believe that the remains of her husband, the king, are very close.

Little is known about the identity of this monarch found in an underground chamber inside a pyramid in the Holmul area – a Mayan archaeological site near the border with modern Belize.

According to the archaeologists, the technique called LIDAR was the one that allowed to find pyramids, entire cities, walls, among other Mayan treasures, that until now had gone unnoticed in the north of Guatemala.

Among these structures identified by laser technology, there is a complex of three pyramids on the outskirts of the city of Witzna. The bones of the queen, discovered under one of these pyramids, denote that she was already an old woman at the time of death, and the trousseau that accompanies her clearly evidences her position within royalty.

This finding means that at least one “king” is buried nearby, so archaeologists will continue to explore the site in search of their remains. The hypothesis is sustained, in addition, in a vase to drink chocolate found there, whose inscriptions name a monarch.(Mayan queen)

“Nobody but a king or queen would have possession of this type of item,” explained archaeologist Francisco Estrada-Belli. “We know from many references elsewhere that, on certain important occasions, a king would invite his allies and his lords and make some of these vases made for him and then donate them to his closest allies. We believe that this is the reason why this individual, who is definitely not the person named in the vase, must have it. “

The excavation in the Witzna complex also revealed an old military building: a watchtower. At his feet, inside a deep well, a skull and teeth belonging to a sacrificed child were unearthed.(Mayan queen)

Also, more ritual activity in the area includes a large number of fragments of vessels that would have been offerings deposited on the top of the queen’s pyramid.

Other stone monuments have signs of having suffered the effects of fire and destruction of their inscriptions; something that scholars believe represents more evidence of rituals or of some military attack.

“What happened at the base and at the top of the pyramid – burned by fire – can be two different things, but in the case of a broken stone monument, we are sure that this was basically an attack on the city . Many of the most important buildings were destroyed, burned, and the monuments with the images of the disfigured kings, “said Estrada-Belli.

More details about this discovery are released in “Lost Treasures of the Mayans”, a documentary broadcast in National Geographic. What do you think? Leave your comment below.

According to ancient manuscripts, Jesus married Mary Magdalene and had children

2 thoughts on “They find remains of a mysterious Mayan queen of 1,500 years old”