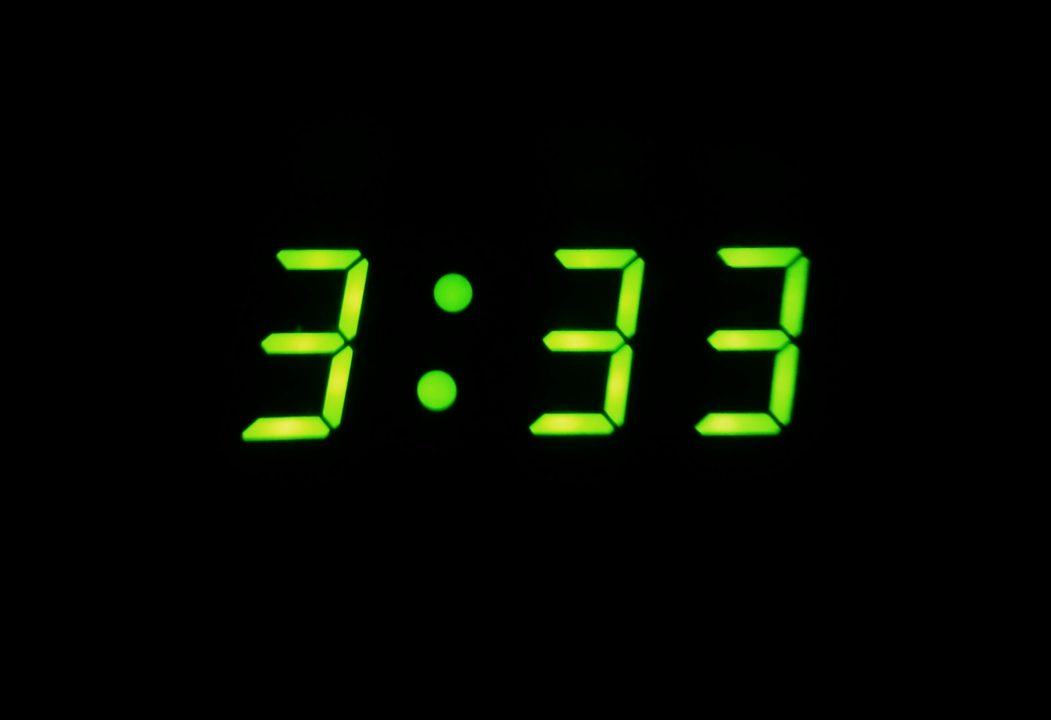 Over the years there have been frequent reports of a variety of unusual phenomena occurring between 3 and 4 pm, particularly accentuated at 03:33 am. Many people claim that at certain times of the night awake for no logical reason, affirming experience mysterious phenomena as ” sleep paralysis “ associated in that time frame. 03:00 am is commonly known as the “Dead Time” or “Time of the Devil” because, according to experts, is the moment when paranormal activity enters its peak. It is said that demons and spirits are a more active giving way to all kinds of paranormal phenomena. Christian popular theory is that Jesus Christ died at 15: 00h, being 03:00 am the opposite time, in defiance of the demons to the “image” of Christ mocking the Holy Trinity.

The origin of the Dead Time

For experts, 3:33 am has a satanic symbolism, as it is half of 666, the number of the Beast. It is believed that at this time the veil between the world of the living and the world of the dead is in contact, allowing the demons and spirits to communicate with people crossing with greater ease than at other times of the day. According to some research, many deaths occur between 03:00 am and 05:00 am because at this time the body’s immune system is more vulnerable. Between these times, the terminally ill or very elderly are more likely to move to the “other side”  because the body is weakened energy. Some paranormal researchers consider this as a theory of why spirits are most active at this time, in correlation with their times of death. The phenomena associated with the 03:33 am ET also been reported by people who recognize repeated patterns of these numbers in their daily life as getting up at 03:33 am or see these numbers everywhere ( Number 33, the power of an esoteric conspiracy ).

At present, it has not been possible to confirm that 15:00 is the exact time of Jesus’ death since religious scholars continue to disagree about the date and time of his death. Therefore, the 03:33 hour besides having a religious meaning has a direct relationship with esotericism. Historically, many people believed that midnight was the “witching hour”, with a period of increased activity for witches, demons and ghosts, where once people avoid going out at night because of this meaning. For the paranormal investigators, the spirits are active all day and that there is no concrete evidence that indicates that the 03:33 am is more active hour than any other moment. However, paranormal activity occurs more frequently at night since conditions are more suitable for performing paranormal research. According to experts, it is easier to see anomalies or appearances in the dark, and many elements are recorded more easily due to the dark conditions. The senses also intensify at night, where psychics capture the paranormal activity that occurs at that time.

Many people claim to have felt mysterious presences while sleeping at certain hours of the night, with a feeling of fear and terror. Due to a large number of these attacks when they go to sleep, they never turn off the light, but unfortunately, they continue to happen. For many, this is a clear example of demonic attacks. They wake up in the middle of the night without being able to move, feeling a dark presence on the same person. This in principle has a direct relation to “sleep paralysis” unless when the victim look at the watch can observe the 03:33 am. In many cases, the person is not a believer, but this fact does not make them remit these attacks.

But of course, for science, it is all in the mind of the victim, derived from psychological or psychiatric problems. But the reality is the one who suffers these attacks at certain times really understands the nature of this fact, which is not produced by the imagination itself. For science, time-out is nothing more than a representation of our collective fear of darkness. During that time of night, our senses are sharpened, as we are much more aware of our environment and we are on guard, in search of potential dangers, this is an evolutionary translation of our innate struggle or our instincts. Historically speaking, our species was more vulnerable at night than at daytime, therefore, we are prone to a greater sense of fear during that time. Scientists in their particular quest for the truth claim that we have retained the fear of darkness.

Beyond the Dead Time

Time-out is a phenomenon with great controversy in the paranormal world since there is very little evidence to support these different theories about personal experiences. And while many people claim to have had personal experiences concretely at 03:33 am, there are so many experiences that occur at all times, stating that the spirits are always present.